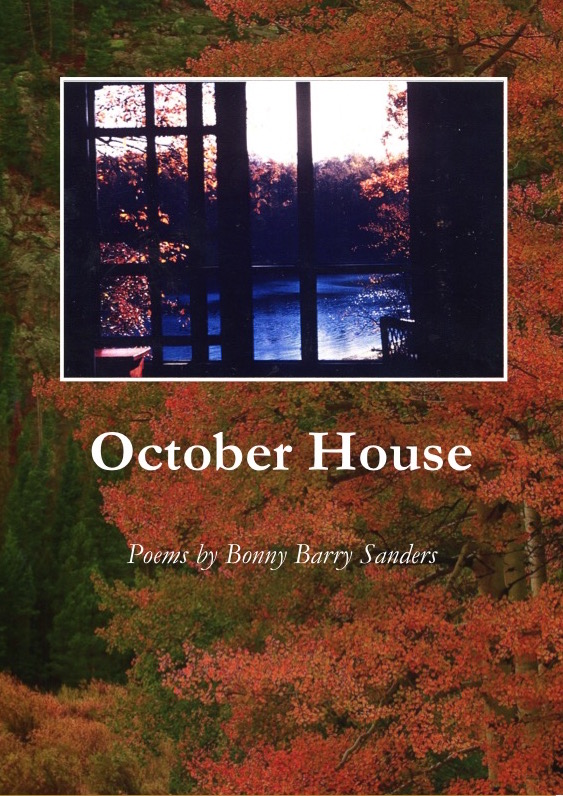 In October House by Bonny Barry Sanders we discover a sequence of memory segments that flash back and haunt ussometimes with the fantasy of allegory, sometimes with painful realismbut with all segments united through the many years and between the four walls of an old house. The architecture of the house serves to suggest both an actual place and a conscious, mental construct of qualities. It evokes a transcendence. Bird song, musical structure, and strong assonance underpin this work. The architecture of the book, like the old house, is defined as well as fluid. Like the architecture of an orchestral piece, it begins with the tonic (home) chord moves, digresses, modulates, presents variations upon themes, and finally returns to the tonic chord. The book shows us that we must find strength to go home, though not necessarily to a place but as in the poem (from This Is the Place Where Sound Was Born) We dream of Eden and the language we would speak again.

Sanders new collection of poems, October House, has this strange lyric authority mixed with details, both vivid and sweet; she has a Saxon gift reminiscent of someone like the great Irish poet Seamus Heaney. A brilliant and memorable new book. Norman Dubie

In an era when so many poetry books are built around singular subjects and narrow focus, its a real treat to come across a book that casts its eyes on family, nature, history, art, society, on living, really, like Bonny Barry Sanders October House. These poems are just as at home in the natural world of raccoons, egrets, and red-shouldered hawks as they are at making real the history of sound. Part Frost, part Whitman, and part Dickinson, these poems are all energy and light. Sanders lines are vibrant and compelling. The work of an artist who honors the world with every detail she includes, every story she chooses to tell.Jack B. Bedell

October House is an aural and visual feast. Poet-naturalist Bonny Barry Sanders sings of light and darkof color, flora, and fauna. Using exquisite imagery, she works as a creator in her own secret rookeries, each of which becomes another house for the reader to inhabit. In her new book the natural world and domestic life echo, refract, and reflect in such a way that elegy and departure become forms of rebirth. Ghost notes linger in the form of fog, mist, smoke, and other guises. For this poets unique sensibility all the senses must be employed to fully appreciate each present moment. Sanders is a master of voice, form, and imagery. Color, fine art, music, and exotica are explored to highlight the grounding of home, even as the personas of her finely-wrought verse strive to follow the meanders, / from the marsh prairie, / from the pines and palmettos (from They Are All Going Somewhere). October House is a masterful achievement.Judith Skillman

Like the house of the title, each poem in this tightly constructed book is both a structure and a moment in time from which Bonny Barry Sanders invites her readers to accompany her on an adventurea journey into history, memory, place, the landscape of the natural world, and the ever unpredictable surprise of her imaginationrendered in images so brilliant and tender, they almost make bearable our doomed search for that elusive key to understanding the mystery of being in the world.Stephen Meats

Bonny Barry Sanders was raised and educated in Annapolis, Maryland, has lived in Massachusetts, Arizona, Colorado, New York, Maine, Florida, and received her Master of Fine Arts degree from Colorado State University. She is the author of a previous collection of poems, Touching Shadows, and a work of Civil War historical fiction, Kiss Me Good-bye. Her poems began appearing in magazines and literary periodicals in 1987 and, since then, have been published in Hadyens Ferry Review, South Carolina Review, Birmingham Poetry Review, The Florida Review, South Dakota Review, Negative Capability, Chattahoochee Review, and many others. She is the author of published articles, book reviews, and childrens stories. A musical rendition of her play , School Master from Flat Creek, was performed at the University of New England. She won the Royal Palm Literary Award for Poetry in 2005, a grant from the Community Foundation of North Florida, and two three-week residencies at the Atlantic Center for the Arts. She served for ten years as an editorial reader for Kalliope: A Journal of Womens Literature & Art and over the years has taught part-time at five universities. She and her husband reside in Jacksonville, Florida.