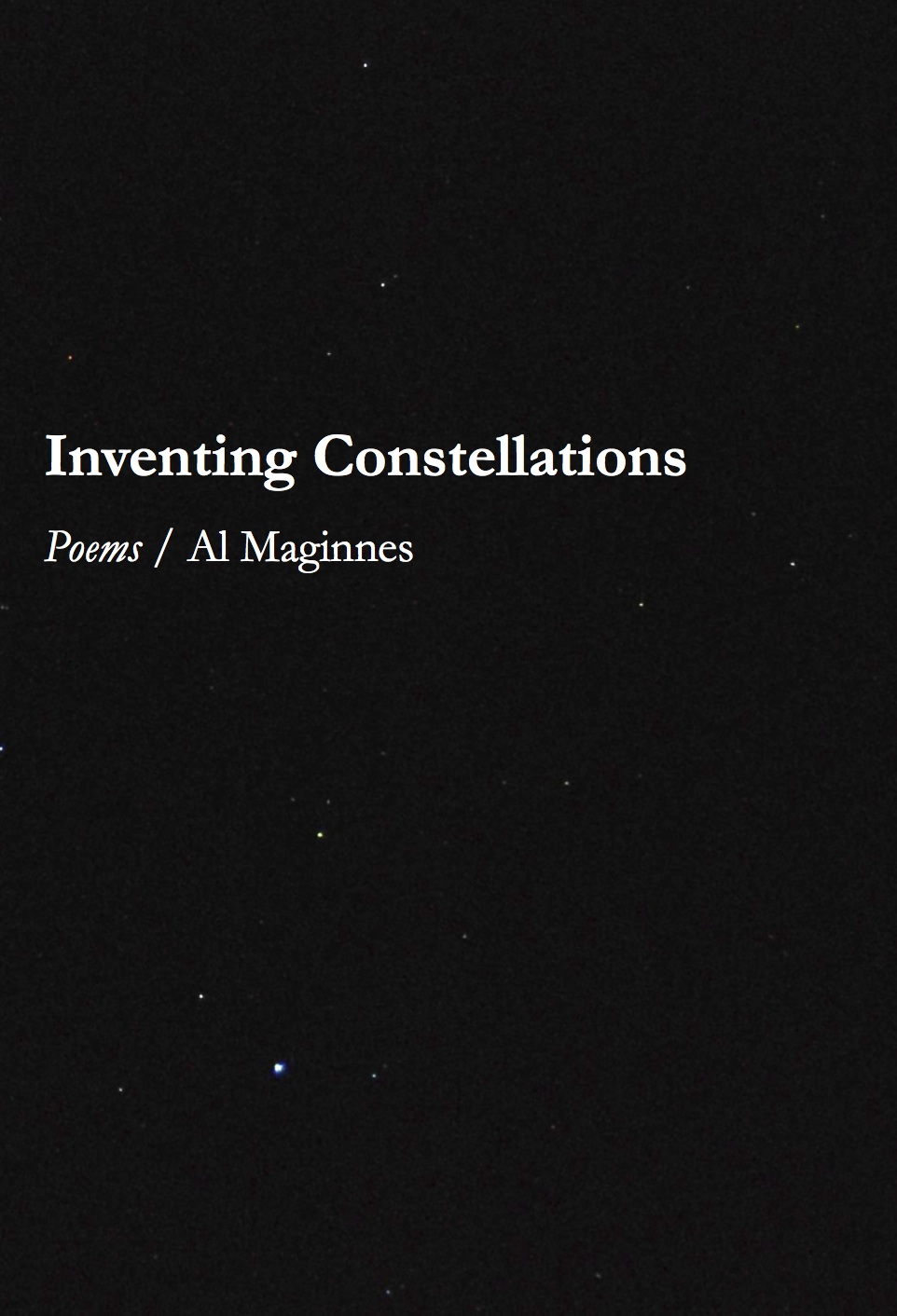 The muted strength of Al Maginnes’s Inventing Constellations is remarkable. Like stars, these poems glow with ancient energy; their quietness belies the power that lies beneath their surface.

“Inventing Constellations accomplishes what the best poetry does—it unites the universal and the particular, and these poems take denotative aim on ‘the universal.’  Long a fan of cosmological detail and theory, I applaud Al Maginnes’s  skill in translating the esoteric and the scientific into the every-day;  he finds the connections between daily life, the life of his family, and the cosmos.  By looking deep into the possibilities of our origins, Maginnes discovers some immediate logic and meaning for our common lives as we stand before the stars.  He knows our transitory nature, how it is briefly illuminated, and yet he arrives at a little hope.  He says, ‘ . . . believe with me that music becomes/our default language after navigating/ the grave.’  This book is an elegant and extended prayer for our lives in the universe—and I believe him.”—Christopher Buckley

“A keen observer, Al Maginnes, in Inventing Constellations, writes powerfully about nature and family, and about the mysterious places where the two either touch or converge.  Anchored to a constellation of family experience, and sustained by an attraction to the past as an invented present of vivid imagistic moments, these poems are about loss of faith, dangerous teen years, jazz, parenthood, birds, bridges, stars, and more.  Maginnes repeatedly enlightens the reader with personal, philosophical, and lyrical meditations that ought to harden his reputation as a poet of subtle originality.”—Peter Makuck

“The fine poems in Al Maginnes's Inventing Constellations echo, in profound ways, Wallace Stevens' dictum that ‘Death is the mother of Beauty.’ In one of them, the middle-aged speaker acknowledges that ‘time has no single direction’ and that ‘even poems, however immortal we hope / they might be, will not extend the share / of time allotted to flesh.’ Yet it is this knowledge, this shadow of mortality, that deepens the joy he feels playing with his young daughter in the yard on a day that will probably be forgotten ‘even if / we breathe it all the way in and use / the best words we know to write it down.’ In another, he reminds the dead he has allowed to keep living in ‘the overstuffed halls’ of his poems that there is much in life to praise: ‘children, / weather, the heart-shaped print a deer's foot / leaves in mud,’ as well as, of course, music, one of Maginnes's chief pleasures, this time ‘a solo / Sonny Rollins played in 1958.’ It is this love of life, sometimes tinged with fear, that is so moving in a suite of poems on the subject of late fatherhood, poems that prove that Maginnes is writing at the top of his form, just like a musician ‘who knows so well where to place his fingers / it is no longer thought / that makes him bend a note just far enough to break a heart.’”—Susan Wood

Al Maginnes is the author of four full length poetry collections including Taking Up Our Daily Tools (St. Andrews College Press, 1997), The Light In Our Houses (Pleaides Press, 2000), winner of the Lena-Myles Wever Todd Award, Film History (WordTech Editions, 2005) and Ghost Alphabet (White Pine Press, 2008), which won the 2007 White Pine Poetry Prize. He has also published four chapbooks, most recently Between States (Main Street Rag Press, 2010) and Greatest Hits 1987-2010 (Pudding House Publications, 2010). His poems and reviews have appeared in journals and anthologies including Poetry, Georgia Review, Shenandoah, Tar River Poetry and many others. He lives in Raleigh, North Carolina with his wife and daughter and teaches composition, literature and creative writing at Wake Technical Community College.